The inscription on this altar is the same as that on no. 79-81 but the two altars differ in certain details. Fa 3 on 79-81 notes that it is a copy. Perhaps it is a copy of this altar. The original is said to be damaged, and Fa 3 on 85-87 reads Ara in parte diruta ornata di festone etc.
85: front. A garland of fruit, flowers and leaves is held by putti standing on tiptoe on the outspread wings of eagles, which stand on rocky projections at the bottom corners. Over the garland two nude youths move to right, one holding a shield and the bridle of a horse, which stands on rocks on left.
On right a sphinx sits on rocks. Beneath the garland a sphinx rides on the tail of a sea-man. A putto with a billow of drapery plunges down after them on left, a flower in the water beneath him. The inscription in the panel top centre reads: DIS MANIBUS/I IC AVEDIO TIF/QVIR GEMINO/IULIA GEMELLA/MATER FECIT
86: left side. One end of the garland is held by a putto, the other hangs on the horn of a young satyr's head. Over the garland two birds fly down to feed their fledgling. Above them is an oenochoe. Beneath the garland an animal (headless) claws the back of a recumbant deer. An eagle stands at each bottom corner.
87: right side. The garland hangs between the putto and the horn of a bearded satyr's head. Over the garland two birds bend down to a nest. There is a patera above them. Below the garland a deer sinks down as a panther rends its back. An eagle stands at each bottom corner. The top of this altar does not slope as in 79-81.

Villa Medici No. 11 written in pencil on the front of the drawing lower left 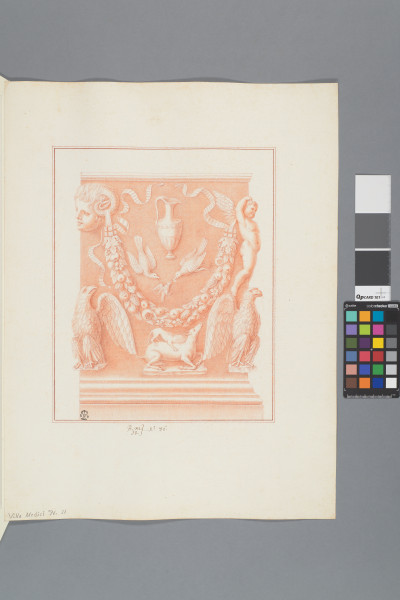