The 18 small drawings are catalogued together here as they are all mounted together on a sheet of paper 580mm x 438mm and are framed with gold lines.

a.Altar. At each side is a column. From the horns of rams' heads facing inwards at the top two garlands hang straight down flanking a panel with the inscription SACR/UM. Between the rams' heads is a Medusa head. At the bottom two monstrous birds flank a fluted krater.
b. Relief. Two nude figures, one large, one small, hoist a herm into position in front of a wall, on which stands a vase. On left a pedimented building stands, with garlands hanging between the three columns along its facade.
c. Relief. A garland of fruit and leaves hangs between two female heads.
d. Base. Two clawed feet with winged legs support a base, the side of which shows a tripod topped by three boukrania in relief.
e. Relief. In a trapezoidal panel are two sphinxes' bodies, facing one another, but joined at the shoulder. They share a head, which faces the viewer and which is flanked by spread wings. At bottom centre is an acanthus cluster.
f. Unclear object. Over a moulding is a panel with concave sides. A garland of leaves and fruit hangs between birds with outspread wings.
In centre from top downwards:
g. Relief. Basket filled with fruit and leafy branches.
h.Two nude putti stand on a ledge and hold a medallion on a cord between them. the edge rests on a leafy mask, beneath which is a leafy arabesque. At the bottom hangs a garland of fruit. ( There is another drawing of arches on the reverse of this one)
i. A triumphal arch is decorated in the attic with a large bowl of fruit flanked by large ears of corn. In the spandrels are globes. Leafy garlands run around the entablature from the keystone, from which there also hangs a krater on fillets, with two cornucopiae, crossed, knotted in the fillets. On the ground in the centre of the passage stands a tall handled vase with five ears of corn.
j. Architectural fantasy. Four sections of architecture are shown one over the other. At the top is a cornice comprising a moulding decorated with leaves and flowers over a plain moulding, then an ovulo and, at the bottom, a dentil frieze. At top left the architectural detail comes to an end and is replaced by a drawing of two dogs together, one recumbant. The second section is a frieze of floral scroll between two leafy bands, oak above, laurel below. The third section is a plain frieze, in front of which hangs a drape as a backcloth to a display of armour: helmet, bow, quiver, corselet, sword and two shields. At the bottom is the fourth section, a plain band in front of which stands a sphere, a square panel with floral decoration flanked by two clawed legs ending in acanthus leaves. and a partly-open box. At the side on left stands a lyre, quiver and a selection of spears and arrows.
k. Between two pillars topped by sea-griffins is an arabesque composed of two cornucopiae of fruit, acanthus, a vase and a lotus-rosette. In a panel below is a Medusa head with leaves and a pelta shield in left and right corners. Up the right is a side panel with leafy 'candelabrum', round which is wrapped a fillet.
Right side downwards:
l. Two males stand flanking a round domed building, which has a cross on top and three round windows.
m. An 'urn' stands on voluted claw feet, which flank a palmette. In the centre of the side of the urn is an open doorway, from which spring crossed cornucopiae ending in sea-monsters' heads. At the top is a voluted 'pediment' in which a bird spreads its wings.
n. Urn. At each side is the protome of a griffin with unfurled wings. In the centre a draped female with bow and spear moves right. On top is a low pediment.
o. Grave altar. A garland of leaves hangs from the top corners. Over it two swans peck at a Medusa head. At each bottom corner a crane-like birds stands on a projecting base. Between them a figure rides to right on a sea-horse.
p. Grave altar. At the top two childish heads flank a frieze of floral scroll. A garland of leaves hangs from rams' heads. Over it is an eagle; fillets fly from below the centre. At the bottom corners sit sphinxes. At top centre is a panel with the inscription: DM/SACRUM.
q. A tall slender quiver (?) is set vertically, with fillets flying top and bottom. Two decorated oval shields are crossed in front of it. The shield in the foreground is decorated with a Medusa head and a caduceus.
r. Base (?). At the bottom two griffins flank a vase; at each side is a ram's head. From here rises a panel over a cable moulding, in the centre of which is a palmette.

A variety of different architectural details

All pen and brown ink except h. which is pen, brown ink and grey and brown wash, on paper 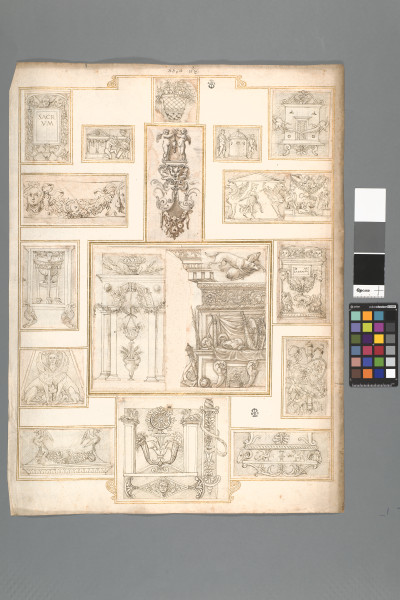