'THE RAWLINS MEMORIAL CUP.
To the Editor of the Eton College Chronicle.
Sir,—It is evident from the recent correspondence in your
columns, regarding the above Cup, that some of your readers are
unaware of its existence, and of the circumstances under which it
was given.
The Memorial to the late Vice-Provost, Francis Hay Rawlins,
organized and subscribed for by his former pupils, consists of:
(a) A panel in the Memorial Hall.
(b) A brass plate in the Vice-Provost’s Stall in Chapel.
(c) The portrait of the late Vice-Provost, hanging on the panel,
given by Colonel S. W. H. Rawlins, C.M.G. and Mr. E. C. D. Rawlins.
(d) The Rawlins Memorial Cup.
This last was offered to the Athletic Committee in 1921: an
at their suggestion, was allocated as a House Gymnastic Cup.
In order to give the Athletic Committee of the day the power to
allot it to another object, should they consider it advisable, the
words “ or any form of Athletics ” were engraved on the Cup.
The conditions under which it was to be competed for, method of
scoring, etc., were left to the Athletic Committee to decide.
Yours faithfully,
L. P. IRBY, Lt.-Col.' 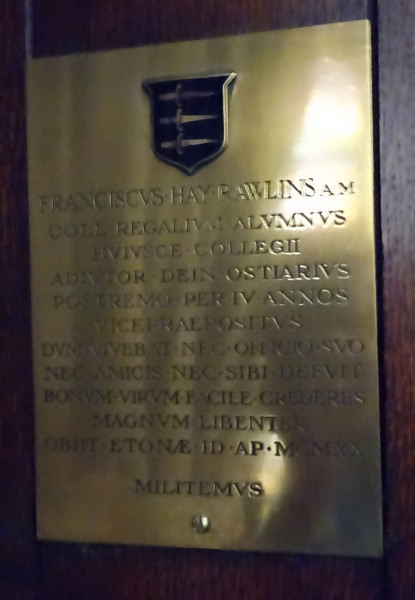