'FLETCHER, GARETH HAMILTON, 2nd lieut., 3rd Battn. Grenadier Guards, attd. 1st Battn. Scots Guards, elder s. of George Hamilton Fletcher of Leweston Manor, Sherborne, co. Dorset, and of 39, reen Street, Park Lane, London, W., by his wife, Constance, dau. of the late S. Herapath, of Westwood, St. Peter's Thanet; b. 88, Park Street, Grosvenor Square, London, W., 13 May 1894; educ. Eton, where he was an officer in the Cadet Corps, and Balliol College, Oxford, studying with a view to entering the Diplomatic Service, but when war broke out, volunteered for Imperial Service, nd applied for a commission, and was gazetted 2nd Lieut. Grenadier Guards 5 Sept, 1914; served with the Expeditionary Force in France and Flanders from 5 Jan. 1915, being lent to the Scots Guardss, who were very short of officers in France; was reported wounded and missing after the fighting at Cuinchy 25 Jan. 1915, when the Germans rushed the front trenches, and is now assumed to have been killed in action on that date. While at Eton he was in the sixth form and winner of King's Prizes in French and German in successive years; was captain of his House; played in the Cricket XI. at Lords in 1912 and 1913, and was keeper of fives, etc.; unm.'

[Source: De Ruvigny's Roll of Honour, Volume 2, p.120]
'In Memoriam
To the Editor of the Eton College Chronicle.
DEAR SIR,—I am sending you a letter* which you see refers to
my son Gareth Hamilton Fletcher for whom you know we have
given up all hope. In this letter there is something which strikes
me as very pleasant for an Etonian to read, viz. that even in the
trenches, wet and miserable as we know they were in January last,
Eton for two O.E.'s was "A splendid subject" and could be dis-
cussed all day. You know there is something very great in it, and I
think it is good for you present Etonians to hear it.
Also I wanted to tell you that there was one line in the poem
"If" in last week's Eton College Chronicle which touched me more
than anything I have read on the subject yet.
"If you can stand still while the C.O. 's talking,
Forgetting there was once a time for play."
That's just it—how they loved play, but how they have fought and
how splendidly they have died.
I am only one of hundreds of unhappy Mothers, but as long as
I live my heart will be with Eton and all its young life and promise
for England.
Yours truly,
A. CONSTANCE HAMILTON-FLETCHER.

* From Lieut. R. Arbuthnot, R.F.A.
"I was in the same trench as your son for a day, when he was most kind and generous to me a poor hungry gunner officer. It was raining all the time, but we sat in a dug-out and discussed Eton, which somehow is always a splendid subject for O.B.'s I was so distressed when, a few days later, I saw that he was missing."'


'In Memoriam
GARETH HAMILTON FLETCHER.
"I have just been reading about our Navy in the Daily Graphic.
Why are we deceived into thinking that Germany really means well
to us and is not every day disputing which is the best of many ways
of wiping us out of the map without a struggle? We are not really
deceived, we only say so because it is a good excuse and we would
rather go and have a game of golf or have a day's hunting. What
fools we all are ! (Especially myself!). Our only chance is to wake
up, and who is going to wake us up? There must be somebody. I
wish he would show himself before it is too late. And God grant I
may be old enough to fight for my country when the time comes.
God help us!"
These remarkable and prophetic words were written at Eton early
in 1909 to his mother by a boy of 15 in Lower Division, gifted with
a keen virile intellect and exceptional bodily vigour.
He began his Eton life, at Easter 1907, by taking Remove. On
his way to Sixth Form he obtained the King's Prizes in French and
German in successive years, and showed much promise as a History
Specialist. His knowledge of French and History was greatly
increased by holiday visits to a distinguished French historian.
He was a brilliant member of his house football eleven, which won
the House Cup, and he played at Lord's in 1912 and 1913, doing
useful work. In 1912 he had a large share in winning the House
Cricket Cup, and as Captain of his House he showed powers of
leadership which developed considerably when he became a soldier.
There was in him a longing for reality and action and a scorn
for what was artificial and unworthy.
At Balliol, where he entered in October 1913, he was doing well.
He had arranged, strangely enough, to spend the long vacation of
1914 at Baden with a German officer, with a view to increasing his
knowledge of German and Germany.
When the war broke out he was one of the first to hear the call
and his early wish to fight for his country was granted. He joined
the Grenadiers, and was serving with the Scots Guards in the
trenches in February when he was reported missing.
Later information has shown, to the abiding sorrow of all who
knew him, that he has indeed given his life, so full of promise, for
our country.' 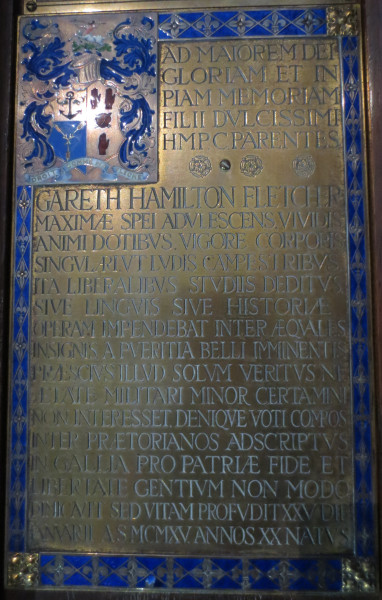