Lettered 'Charles I King of Great Britain &c. From the Painting of Sir Anthony Vandyck, 3 feet 9 inches high; by 2 feet 3 inches wide, in the Collection of Robert Strange.', and the same passage in french, followed by 'This Picture formerly in the Collection of King Charles 1st, was amongst other portraits of the Royal family, carried abroad by James II. It was given as a present by that Monarch to Cardinal Philip Thomas Howard. the Cardinal dying at Rome, it came afterwards into the possession of James Edgar Esq. Secretary to the Grandson of Charles, in whose custody it remained many years. Upon the death of Mr. Edgar, which happened during Mr. Strange's stay at Rome, he purchas'd it of the executors.'
Inscribed in pencil on reverse 'Portfolio 1 Portraits BC 286' 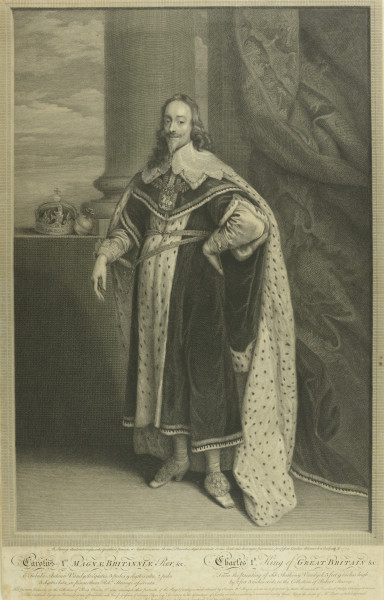